Here is the recipe for my favorite cake. Which, as it turns out, is also the cake I request for my birthday every year. Many thanks for my wife who made it for me earlier this month. 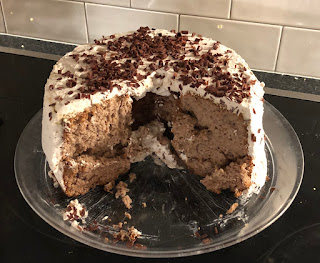 It's a doosey of a recipe. It will take over your kitchen and every bowl you own. But the soft, pillow-like texture (minus the feathers), combined with the mild chocolate and coffee flavors, will make this one of your favorite recipes too.

FYI, it's an old family recipe from my father's side. Thanks to my Mom for putting the recipe together for my wife!

Cake Directions:
1) Pre-heat oven to 375
2) Sift together flour, powered sugar, cocoa, and coffee, then stir until well mixed
3) Beat egg whites and salt in large bowl until frothy
4) Add cream of tartar to egg whites, and continue to beat until stiff peaks form.
5) Sprinkle flour mixture, a little at a time, on the egg whites and fold gently into egg whites.
6) Pour mixture into un-greased angel food cake pan.
7) Bake for 35-40 minutes at 375
8) Remove from oven. Once cool, add topping.

Topping Directions:
1) Whip the cream until it begins to stiffen slightly.
2) Add vanilla, sugar, and cocoa to taste (just a little)
3) Whip until desired consistency is reached
4) Spread over cake
5) Shave slivers of chocolate onto top of cake.
Posted by Lake Norman Foodie at 10:49 AM No comments:

Kathleen Purvis, the Observer's Food Editor, went on a road trip and hit some of the more recommended Gas Stations, and had some surprising (and not surprising) results.

Also, this article reminded me of an article I previously posted about the Cashion's in Cornelius, which had an amazing hamburger.

So, I ask you -- where is your favorite Gas Station Food??
Posted by Lake Norman Foodie at 10:17 AM No comments:

The folks over at FoodNetworkHumor.com recently came up with a GREAT topic:
7 Things Paula Deen Fried – And Ate.

As you may have guessed the list is pretty impressive.

Though there are only seven items listed, they run the gamut. From a deep fried cake to Fried Butter Balls (yes, breaded and fried clumps of butter and cream), just reading this post partially clogged my ventricle artery!

Is there a doctor in the house??

Here's the link! http://foodnetworkhumor.com/2010/01/7-things-paula-deen-fried-and-ate/
Posted by Lake Norman Foodie at 9:23 AM No comments:

Ok, this is the last reminder. Good through this Sunday only, go to Dressler's restaurant in Birkdale, and get the Calamari for half price by mentioning the Lake Norman Foodie Blog!

It's the best calamari I've ever had. So, it's highly recommended!

Go! Enjoy! I know I will!
Posted by Lake Norman Foodie at 5:39 PM No comments:

First, I'd like to apologize for my lack of posting the past month. With the holidays and then with my birthday, I've been waay too lazy busy to get much posting done. Also, I've started a new project that will probably take much of my time for the near future (details on that in a few weeks).

So, to whet your appetite for Foodie News, I though I'd share the following article, from Forbes.com, with you: Latest shot in hummus war: Israel doubles record.

Not only does it sound delicious, but I think it'd be a great way to settle things in the Middle East -- just have a hummus contest! Whoever makes and consumes the most hummus wins!
Posted by Lake Norman Foodie at 9:17 AM No comments:

Though you may have noted in my previous post, I wanted to remind ya'll of a great discount at Dressler's in Birkdale.

This week only! Get half off on the calamari appetizer. (Which, is the best calamari I've ever had!) All you need to do is mention the Lake Norman Foodie Blog to your waiter / waitress.

-LNF
Posted by Lake Norman Foodie at 4:03 PM No comments:

A short while before Christmas, I had the opportunity to sit down with Dressler’s Restaurant Owner Jon Dressler. Dressler’s is a mainstay of the Birkdale area. Offering an upscale yet casual feel and excellent food; this is a place to go for a date night, or just a dinner with the family.

And that’s the key word. Family. It’s something that Jon has focused on since he opened Dressler’s -- and it’s something on which he continues to focus.

Jon started his trek into the restaurant business as a dishwasher while in high school. At the time, he considered getting paid (and fed by the chefs) to wash dishes was a great deal. In college he continued his restaurant experience by working for a small family-owned restaurant. At first he worked there as a bus boy, and quickly worked his way up to become a waiter; a position which he enjoyed. “I got to wear a nice shirt, take food to people, got fed by the chefs, worked in an air conditioned room, I got paid for it, and I got tips too,” Jon recalled. “After working as a dishwasher, I thought that was great!”

After a brief stint in San Francisco working for a local health store chain, Jon realized he wanted to be his own boss – eventually. However, with a degree in Sports Management, and an MBA, Jon decided to move to Chicago to learn something new.

It came down to three choices. Work as a ticket salesperson for the Cubs, work as a consultant for a major firm, or work his way up within Morton’s Steakhouse and get back to his restaurant roots…. You guessed it. He was back in the restaurant business.

Jon started with Morton’s as a Day Manager, and planned to be there for only a year. But about 6 months into it, he realized it would be a good training opportunity. So, he did what any good apprentice does. He decided to work there until he learned everything he’d need to go out on his own. After 10 years, including the move to Charlotte, Jon decided to start his own restaurant.

And this is where his focus on family comes in. And I’m not just talking about blood relations – his staff is considered to be family too.

Jon brought over many of his staff from Morton’s -- even though none of them knew he was leaving Morton’s to open his own restaurant. But after he announced his resignation on April 1st (most of the staff though his resignation was an April Fools joke), they followed him to Dressler’s.

As a way to keep the family atmosphere, and also keep the staff focused, Jon has a family-style dinner for all the staff every evening before Dressler’s opens for dinner. Jon commented, “I want them to be thinking about the guests, not how hungry they are.” So, together they sit and talk around the table just like most families do.

Jon is also able to focus on family because a very valuable family member makes the desserts that Dressler’s patrons rave about -- Jon’s Mom makes many of the cakes that are served at Dressler’s. In fact, all the different types of cheesecake and carrot cake are made almost daily in the Dressler’s kitchen.

But it’s not just his mother that is part of the business model. His restaurant in Concord, Max’s Ally, is named after his children Max and Ally. Combine that with a loving and supportive wife, and you’ve got a support structure that’s ready to handle ANOTHER restaurant.

Yup, you read that right. A new Dressler’s is opening at the Metropolitan <> in Charlotte. And though the timing isn’t exactly perfect – it opens six days before Valentine’s Day – Jon is excited and expects it to do just as well as his other two restaurants.

Now this is where I’d planned to wrap up this article, and say something positive and semi-heartwarming. Unfortunately for you, you don’t get to read the planned conclusion.

Fortunately for me, Jon is a nice guy, and he chose to addict me to my now favorite appetizer at Dressler’s -- the Thai Crispy Calamari. This means that I’ll just rave about the Calamari instead of drawing up a nice conclusion….

Oh. My. God. That appetizer is heavenly!! The Calamari only consists of lightly breaded Calamari Filets. (No tentacles!) Those filets are then fried and drizzled with a wasabi sauce and a Thai peanut sauce. They are cooked to perfection and in no way resemble the rubbery flavorless mess that most restaurants try to pass-off as an appetizer.

I was so enamored with this dish that I asked Jon if I could share it with you guys at half off. And guess what he said —YES! So, that’s right, just mention this blog (Lake Norman Foodie) to your waiter when ordering the Calamari Appetizer at the Birkdale Dressler’s, and you’ll get it for half off! That’s a savings of over $5.00! This offer is good for one week only January 11 through the 17th.

With this deal in effect, I'll become a regular at Dressler's for the upcoming week! Enjoy!
Posted by Lake Norman Foodie at 9:57 AM No comments: