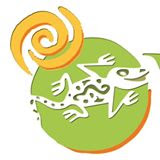 With that said, my wife and I were seriously craving some steak fajitas the other day, so we packed-up our toddler (and all of her travel gear) and drove 10 minutes to Verde.