With that said, my wife and I were seriously craving some steak fajitas the other day, so we packed-up our toddler (and all of her travel gear) and drove 10 minutes to Verde.
We arrived at 6 p.m., and the place was packed. But, we were able to grab the two remaining tables in the bar area, and placed our order as soon as the waiter appeared.

Considering the restaurant was so full (they had a group of 20 taking up a large portion of the main dining area), our food didn't take too long to arrive. It took about 15-20 minutes to appear -- just about the time that my daughter's attention span started to wane. 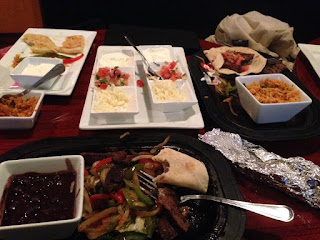 The steak was seared on the outsides, with the center being slightly pink. In addition the tequila cilantro marinade infused some wonderful flavor to the skirt steak and made it quite tender. Lastly, the steak was served on a bed of grilled peppers and onion

Everything was delicious, and I almost finished every bite -- despite the generous portions.

My toddler ordered a cheese quesadilla. The tortilla looks like it was cooked with some oil or butter to make the exterior of the tortillas nice and crunchy. Despite being quite tasty (I had a bite) it was far too large for her (it would have been almost too large for me), and had a LOT of cheese.

Summary:
Some of the best Mexican food in the area, but it's the menu's variety of Latin-inspired dishes that really shines through. The atmosphere is ok and the servers are very attentive. In addition, they make some amazing mojitos and margaritas.

Price: $$$ (fajitas and large margarita will come out to about $25 per person)
Kid Friendly: Yes. Booster seats and children's menu with crayons are available. There are immaculate changing tables in both restrooms.