In late July, I finally visited the Cookout in Huntersville. It was a new experience for me. I was unfamiliar with this regional chain, and wasn't prepared for the sizable menu. I made my choices quickly, and didn't know what to get.

But yesterday when I walked into the NEW Cookout in Denver, I was ready to order. Thanks to Laurie's comments, I realized that I wanted to order a Chocolate Banana milkshake. And fortunately, VermillionRes alerted me to a VERY important detail -- Side items include meats! Like a hot dog, corn dog, or chicken nuggets! FREAKIN' AWESOME!

Ok, ok. Sorry for losing my composure there. I'm back.

After I placed my order, I took my seat and waited for my number to be called. My shake was ready first, and I took a sip. This milk shake actually had a REAL banana. I was a little surprised -- I was expecting banana flavoring not the real thing. The shake was nice and thick, better suited for a spoon than a straw. Just the way I like it! 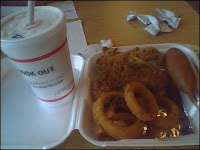 Next came the food. Three chicken strips (two large, one small), some onion rings, and an average sized corn dog. The chicken strips were OK. The breading was crunchy and thick. But unfortunately, the chicken was slightly over cooked, and was quite dry inside. The onion rings were nothing special. I suspect they were pre-made and frozen. So, they were about average.

Then I had the corn dog. I wish I could say it was earth-shattering. But again, only average. Personally, I like the corn dogs at Wienerschnitzel or A&W better. However, since none of those are in the area, I suspect these will do. The Cookout corn dog had a good amount of breading on it, and the mustard was fine. But the actual dog lacked some flavor -- an all beef dog in the middle would have been better.

The atmosphere at this Cookout was about average for a Cookout, and I like the interior more than the standard McDonalds or Taco Bell. It has more character. But I do find it slightly amusing that the Huntersville Cookout has a more prominent lake theme, while the Denver Cookout is MUCH closer to the lake, but the lake theme is downplayed.

Conclusion: Though most of the food was only average, for less than $6 I consider this to be one of the better values in the area. So far I've found the shakes and burgers to be the best items here. I'll need to return again to try the BBQ.

Restaurant Info:
Cookout
Hwy 73, just east of 16. Next to the vet hospital
Denver, NC
http://www.cookoutnc.com/
Posted by Lake Norman Foodie at 8:14 AM