A few weeks ago an acquaintance of mine asked about this blog. After some blog-ish conversation he asked, "Have you been to Jeffrey's? You've gotta go!" He was adamant that I visit Jeffrey's as soon as possible.

I was taken slightly aback by his enthusiasm. I'd never heard of this restaurant, but my friend was talking about it with the fervor that one usually reserves for 131 Main, Dressler's, or Eez. I had forgotten that conversation until I got an e-mail from Erica yesterday. It asked "What about Jeffreys Restaurant off of exit 33 in Mooresville. near McDonalds, across from Dairy Queen and Shell gas station?"

Did you catch that? To make sure I got the right restaurant Erica mentioned FOUR landmarks! Not just the exit, not just one store, but a total of four places! Heck, my GPS usually isn't THAT accurate!

So, I realized that I had to quickly find-out what this hubbub was about.

Jeffrey's is a very nice stand-alone building, off of exit 33. Near the McDonalds, and across hwy 21 from the Dairy Queen and Shell Gas Station. :) It's exterior is adorned with brown-ish bricks, and the interior is filled with warm colors and dark brown woods. The second I walked in the door, I found myself relaxing.

Because it was such a nice day outside, we asked for an outdoor table. The patio was empty, and we were quickly seated. The patio is large, and I imagine it is packed during the evenings. Along with a small water feature, there is a large outdoor fireplace that is a focal-point for the patio. Though there was a little noise from the roadway, it wasn't too bad.

Once we took our seats, we looked over the menu. Honestly, everything sounded good. From sandwiches, to salads, to the specials, nothing was over $10! EXCELLENT!

I decided upon the "Country Style Steak," and for my two sides I chose the macaroni and cheese and fries. Once we placed our orders, my friend and I chatted over our drinks (I chose sweet tea), and some potato rolls that our waitress brought for us. 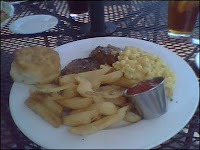 The potato rolls were surprisingly sweet, and tasted somewhat like Portuguese sweetbread. (No, not sweet breads!) After a while our meals were brought out. As you can see, the steak is indeed country fried, but there's more to it. It's placed in a thick gravy-like sauce that tasted like no gravy my Mom ever made. It was delicious and accented with onions. The macaroni and cheese was actual macaroni and cheese -- not that stuff from a box. But they actually used real cheese for the sauce.

And to top it off, I enjoyed the thick cut fries. Seasoned with large salt crystals, these fries still had their skins, and were crisp on the outside, and tender inside. Here's the thing -- I NEVER enjoy thick-cut potatoes. If I do enjoy them, they are exceptional -- and these were. Also, I can't forget to mention the biscuit -- fantastic!!

According to their website, Jeffrey's Restaurant offers "New American Cuisine concentrating on fresh regional ingredients from around our country with particular attention to the 'soul warming' south." I think this sentiment really describes Jeffrey's very well.

Price: $$ (Special, drink, and tip put it at $14)
Kid Friendly: Yes, but this restaurant has a upscale casual feel. Probably not the best place if your kid is a screamer.