A few weeks ago I started craving an authentic Cheese Steak sandwich. The image of thinly sliced beef, onions, and melted cheese were calling me. I needed a fix. So I headed to LaSpada's.

LaSpada's Original Cheese Steaks and Hoagies in on Hwy 115 in Cornelius, next to the fire station, and across the street from Quixote Cafe. Though there are two other LaSpada's, they are in Florida, and it appears to remain a family affair. It is noted on the sign, that these restaurants originated from Chester, PA. But according to the website, the family moved from PA to FL at least 30 years ago.

LaSpada's has a local dive feel. It's not the cleanest place, and the inside eating area doesn't make you want to stay and chat. Surprisingly, the outside seating is very nice in comparison, and there is a landscaped garden in front of the patio. So, after we ordered, a buddy of mine and I took a seat outside.

The nice thing about our cheese steaks, is that the meat wasn't pre-cooked waiting for us. Once we ordered, the we actually could hear the meat sizzle as it was placed on the cooker. The meal was brought to our table, and I had a look. The cheese steak had steak, onions, and melted white american cheese. I also had waffle-cut fries on the side. 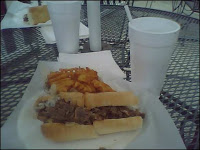 I've had amazing cheese steaks, and I've had crappy cheese steaks. This one was somewhere in-between. The roll it was served in was OK. The steak with melted onions and cheese, was again OK. I was hoping for a little more flavor. However, it seemed the steak was overcooked, and it had a leathery texture. The fries were nice and crispy and pre-seasoned. There wasn't much need for ketchup.

I've been to LaSpada's before, and my sandwich was better then. However, that was last year, and I won't let that sway the score below. But as always, I encourage you go to the restaurants I review to check them out for yourself.

Conclusion: One of the few places in the area that specializes in cheese steaks. The second you walk in the doors, you feel like you're back in PA.