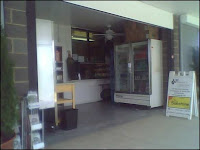 At least I thought it was just going to be a snack bar. But I was wrong. The Sunshine Cafe is a little more serious than a standard snack bar. It's run by Armin's Catering, and therefore most of the food has a slight gourmet touch. After all, when was the last time you went to a snack bar and ordered "Grilled Cilantro Chicken Breast served on Foccacia Bread with artichoke parmesan spread with melted muenster cheese?"

Ok, unfortunately I didn't order that -- it sounds delicious (I just saw it on the menu). But I did order the Birkdale Club, and was satisfied with my selection. This club contains "Grilled Sliced Smoked Turkey with melted muenster cheese with crisp bacon, honey mustard, leaf lettuce and tomatoes served on toasted wheat bread." 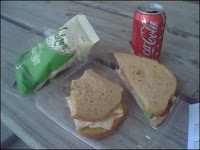 Granted, it's a basic sandwich. But the ingredients were solid. The bacon was crunchy. The lettuce crisp. And the tomatoes were large and ripe. It came with a bag of chips, and a can of coke. And it cost only about $6. A pretty good deal. The sandwich was good, but not great. It was perfectly edible, and the ingredients were good, but it didn't knock my socks off -- it just seemed to lack flavor. Perhaps I should have tried the sandwich with the grilled cilantro chicken. That one sounds a little better.

Since the sunshine cafe is at Blythe Landing, there aren't too many seating options. And all that exist are outdoors. My friend and I grabbed a seat in front of the Cafe on a picnic bench. The nice thing is that there is a view of the water. The bad thing is that we were constantly shooing away flies. I get the feeling that the Cafe exists primarily to provide food for outbound boats, so people can eat while boating on the lake. Eating on land is an afterthought at best.

Conclusion: Good food, for a good price. The outdoor seating is nice, but the competition with the flies is not. I feel like they offer better sandwiches, but I just didn't choose the best. It wasn't bad -- it just lacked flavor. I'll head back again, but next time I may choose to eat at home. FYI, they have limited days of operation (Wed - Sat; 11a-3p). If you have a boat, they offer dockside service.