When I first heard about La Patisserie, a friend of mine described it as a "Mexican Bakery." Once I got there and had a look around, I think that "Mexican Bakery" defines it a little too narrowly.

La Patisserie definitely has a Latino influence -- their empanadas look and smell amazing. However, they are more of a traditional bakery than I was expecting. They offer hand made pastries (croissants, turnovers, scones, etc.), desserts (cookies, tiramisu, cakes, etc.), and they make sandwiches too!

La Patisserie is located in a non-descript strip mall in Mooresville, located between the downtown area and Prickly Pear. If I wasn't looking for it -- I don't think that I would have seen it. The mall has a worn-down feel to it. Fortunately, once you enter La Patisserie, you leave that all behind.

When you enter this bakery / cafe, you're greeted by several display cases that show-off the pastries, deserts, cakes and crepes. This place just looks yummy. From photos on the walls, to the food in the display case, I think I gained 5 pounds by just walking-in!

I took a look over the menu, and though I REALLY wanted an empanada, I've missed having a decent Cuban sandwich too. So, I ordered the sandwich hoping I wouldn't be disappointed. 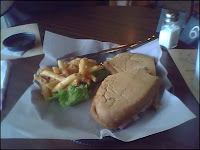 The sandwich arrived, and I took a bite. It was decent. It had "seasoned roasted pork, ham, Swiss cheese, pickles with mustard served on fresh Cuban bread." The sandwich wasn't too dry or too wet. The pickles and mustard added a decent tangy-ness to the sandwich, the bread was good, and the meat was savory too. That said, I've had a much better Cuban sandwich before. This was good, but it didn't knock my socks off. In addition, I found the accompanying pasta salad to be lacking flavor. All-in-all, I found my lunchtime meal to be about average -- a score of 3/5.

But before I left, I grabbed some chocolate croissants and some cinnamon sticks to take home. The sticks would be dessert, and the croissants would be breakfast.

Now this was a good move!

The cinnamon sticks were HUGE. Over a foot long! They were crispy, flaky, buttery, and cinnamon-y. In addition, the glaze over the top was delicious, and after the dessert, I was licking my fingers trying to get every last crumb. Then this morning, I had the chocolate croissant with my morning coffee. It was light and buttery, with a very good chocolate filling. Not too dark, not too sweet. Overall, these are some very good pastries! This gets a 4/5.

Cuban sandwiches are a hard sandwich to master, so I'll be back again to try the empanadas. I'm going to average the food scores together for a 3.5/5.

Conclusion: Though I found my lunchtime sandwich to be average, I found the pastries to be quite good. If I lived closer to Mooresville, I'd be here every morning for a cup of coffee and a pastry. I'll definitely be back to try the empanadas!