If you've driven into, or out of, Mooresville along 115, you've seen the What-A-Burger drive-in. After I returned, I started Googling What-A-Burger to see what I could learn.

From about 30 minutes of Googling, I have learned that this What-A-Burger is one of the few remaining restaurants from the original What-A-Burger drive-in chain that began in Virginia during the 1940's.

There is another Whataburger chain of restaurants that began in Texas in 1950. It had become very successful, and stretches from Arizona to Georgia. But don't confuse the two... apparently some people are VERY adamant about which one is better.

This Mooresville What-A-Burger is designated as #11 by it's sign. So, at one point there were at least 11 of them. It's a drive-in that is stuck in time, they still have speakers to order your food, and the food is still delivered to your car.

But the years haven't been kind. I'm sure at one point it was a sparkling beacon in Mooresville, with it's huge and bright sign. Now it's more of a dive, desperately in need of a coat of paint.

My buddy and I pulled in for some lunch last week, and I think it's best to say that it was a mixed experience. 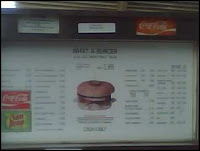 We enjoyed the novelty of visiting a real and original drive-in. And apparently others enjoyed it too -- the standard parking lot was as packed as the drive-in slots. After I looked over the menu, I made my decision -- a what-a-cheeseburger, with fries and a large coke.

After a few minutes, the speaker next to the menu crackled to life, and asked me what I wanted to order. I pushed the black button as I spoke, hoping that this would allow the speaker to hear me better. It did. The speaker spoke back to me and confirmed my order. For a beat-up speaker from the 1940s, it's pretty smart! :)

We waited about seven minutes for our orders to be brought to us. Surprisingly, the food was handed to us. There was no tray to be left on our window. This lead us to place the food on the dash, drinks in the cup holders, and the four small paper ketchup cups next to the gear shift. This will be important for later in this post.

I opened the paper wrapper that was toothpicked to the burger. As it turns out, the toothpick also keeps a pickle to the top of the burger. The What-A-Burger is advertised as being bigger than the standard burger at this restaurant. It has a 5 inch (diameter) bun, and has a 1/4lb patty. My burger had lettuce, tomato, onion, cheese, and mayo. 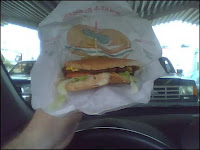 As you can see from the photo, it was really squished and the bun was pressed so that it was really thin. As I was in to my second or third bite, I hear my friend yell "OW!" As it turns out, he kinda forgot about the toothpick.... and while taking a bite, got the toothpick STUCK UP HIS NOSE!!!

Yea, I found it hilarious too! I was trying not to laugh. But really, a toothpick up the nose? Isn't that supposed to be a nose-pick?? (I'm hilarious!)

As I was laughing, I took a bite and proceeded to chomp down on -- the toothpick in my burger. Though it was nowhere near my nose, it wasn't in straight, and apparently was pointing forward. Yup, that's what I get for laughing at the misfortune of others! Karma = 1; Foodie = 0.

I yanked the toothpick, and got back to eating. Unfortunately, the burger was only OK. I was really hoping for a delicious, juicy, and mouthwatering burger. Something equivalent to Five Guys or In-N-Out. This hope left me disappointed. The patty was just a standard fried burger patty. The produce was actually good. But the OK burger combined with a soggy and thin bun, just didn't do anything for me.

As I was thinking this, the paper wrapper gave way, unleashing a flood of mayonnaise, grease, and tomato-juice onto my lap. The paper wrapper is just that -- paper. So the entire time I was eating, it was getting soggy. Eventually it couldn't hold the liquid back, and my shorts (which I had just pulled from the dryer), were now soggy. UGH. Karma = 2; Foodie = 0. (ok, ok, I'm SORRY for laughing about the toothpick!)

I now made my way to the crinkle-cut fries. Really, these fries sucked. They were lacking flavor, weren't crispy, and overall a disappointment. To give you an idea of how much I disliked these fries -- I stopped eating them after only having three. They simply weren't worth the calories. That said, my friend's onion rings were really good and had a decent coating of batter. They seemed mass-produced and not home-made. But they were good nonetheless.

After we finished our meal, we threw away the trash, headed home. The drive was fine until I turned into my friend's neighborhood. As I made the turn I saw something out of the lower right corner of my eye fly though the air from the gear shift. Remember those ketchup cups I mentioned earlier?? Well, they were back! On the carpet of my car... UGH. Karma = 3; Foodie = 0.

I learned three things on this trip:
1) Not to expect great things from What-A-Burger's food.
2) Despite the grease stains on the dash, it's still fun to eat at a drive-in.
3) Never laugh when a friend gets a toothpick up the nose -- it could make your life messy!

Price: $ (Well under $10)
Kid Friendly: Yes, because they'll be in your car. No, because your children will be making a HUGE mess in your car!

Conclusion: The food is lackluster. But I recommend eating here if you haven't. Why?? Because, it's a freakin' original drive-in!! It's a piece of history, and these places don't really exist any more (with a few exceptions). So pack your car with friends, good music, and go check this place out. It'll be worth it -- at least the first time