Yeah. You read the title right. I went to the Cashion's just east of exit 28, at the corner of Catawba and Statesville Rd. Inside the Cashion's there is a little grill that serves very basic short-order food, (i.e. burgers, hot dogs, sandwiches, and some breakfast).

Generally speaking, I try to avoid gas station food -- because it GIVES ME GAS!! (HA! I kill me!!)

Ok, ok, juvenile humor aside, I really do try to avoid gas station food. In fact, I've never had any prepared food from those fast-food / gas station combos that you see along I-77 or I-85. But longtime Foodie reader Bill insisted that I try this place.

Bill was right -- the burgers here rock! They're hand made patties, topped with a serious amount of cheese, with some of the best produce around! Seriously. 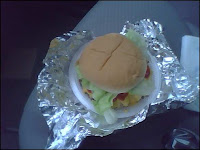 The burger was prepared to order (after I ordered, I heard the burger hit the grill), and I asked for tomato, onion, lettuce, ketchup and cheese. A few minutes later I was handed the burger on a plate, wrapped in aluminum foil. The burger was drenched in American Cheese. (Typically I don't like American Cheese, but with this much melted gooeyness, I can't complain).

The produce was amazing. Really. I need to shop where they do. The two tomato slices were thick, ripe, and bright red. The iceberg lettuce and white onion were fresh and crisp.

The patty, cheese, and produce combined to create one of my favorite burgers in the area. To me, it even beats the 5 Guys burgers -- and THAT's high praise. In addition, it was relatively cheap. The burger and a bottle of Coke came to $4 and change.

The only downside to the burger is that it is at a Cashion's. So there is no seating, and if you eat in your car (like I did), there will be a smell of gasoline. But, it was worth it for this cheap bite of deliciousness.

Price: $
Kid Friendly: No. There is no place for your little-ones to hang out while placing the order.

Conclusion: Cheap prices, low visibility, and a REALLY good burger make this one of best kept secrets for burger lovers.