At the urging of a friend of mine, I decided to hit the local Mac's to get some BBQ. This was my first time at Mac's, and I was curious about what I would find. And more importantly, how would it compare to Lancaster's (my favorite BBQ in the area.)

Mac's has a definite biker bar feel to it. In the front there are almost a dozen motorcycle parking places (cars park in the back), while inside you'll see lots steel, wood, and many HDTV's.

Once inside, my friend and I were taken to our seats at a small elevated table in the middle of the main room. From my seat I could see no fewer than 4 HDTVs, each one with an ESPN channel showing. The menu has a decent selection ranging from standard BBQ and ribs, to salads and sandwiches.

Wanting to have a smaller serving of BBQ and some sides, I decided upon the "lil pig" BBQ sandwich. Along with the one side of mac and cheese, I decided to get a second side of BBQ beans. (Beans, beans, good for your heart, the more you eat -- the more you...) Oops! Sorry for that brief trip down grade school memory lane.... 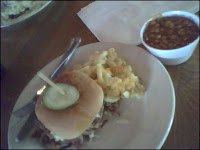 Anyhow, the food arrived quickly and I took a look. As you can see, it was pretty much standard BBQ fare. The BBQ pork was a little more bland and dry that I was expecting. However, the sauces at the table added the needed flavor and moisture.

The sides, however, were delicious. The mac and cheese was made with real cheese and was creamy and good! The BBQ beans, were really flavorful and had a nice and thick sauce that had hints of molasses and brown sugar. The sauce had some meat in it, but not much.

I know people love their BBQ, and I'm sure this will ruffle some feathers. But, I didn't find anything about Macs that was extraordinary. For the most part it was about average. The BBQ was OK, but the sides were slightly above average. The next time I go, I'll be sure to try their ribs, and see if my experience differs.

Conclusion: About average BBQ with a biker theme. It was OK, but not memorable. I'll head back again because I want to try their ribs.