Today after a meeting, I decided to grab some lunch in Birkdale -- sometimes convenience is a deciding factor. But where would I go? I've been to almost every restaurant in Birkdale. Where could I go for a sandwich?

Then I remembered something. When I first moved to the area, I visited Cafe Mia once for a coffee and free WiFi. While there, I noticed that they had sandwiches. So I decided to head over and see what I could find.

I walked in and took a look around. I immediately noticed the three large flat-screens above and behind the counter that were showing the entire menu, prices, and photos. This place is a little higher-tech than the typical ice cream or sandwich shop!

There are display cases from the door to the register. They have desserts (cupcakes = YUM!) and LOTS of home-made gelato. The color scheme is more mild than I remember (I think it used to be bright pink), now it has warm chocolates and pastel-like periwinkle (my wife swears that my color identifying ability is totally off, so take these color descriptions with a grain of salt).

A man in a chef's coat greeted me and took my order, a Toscano Panini and an iced vanilla latte. Sounds like a good way to spend an afternoon!

The latte was prepared immediately, and then he went into the back room, I'm assuming to make the panini.

I took my seat and had a sip. The iced latte was great! The drink was a little on the sweet side -- just the way I like it. The chairs at my table were a little difficult to get used to. They're formed plastic, and very solid. I almost fell trying to get out of my chair, so be careful of these things! About 10 minutes later the panini arrived. 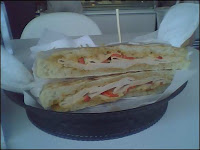 The photo shows what the two sandwiches looked like stacked on top of each other. And simply put, it was delicious! The cheese melted into the tapenade creating a creamy gooey concoction that just worked with the peppers and the and turkey. The flavors built on each other, and I had to pace myself since this sandwich melted in my mouth. And in all honesty was light-years better than the sandwich I recently had at Sonoma in Uptown.

But before I left I had to have a bite of their home-made gelato. Which, apparently, is made daily. I had a small Caramel Cream, which I ate as I walked around Birkdale. It was amazing. It was creamy, sweet, and smooth. It was the perfect way to finish my meal. And since I was walking, the calories don't count -- RIGHT??

Price: $$ (sandwich and coffee were over $11, and I don't think the gelato was any more than $5)
Kid Friendly: Yes. With the gelato and cupcakes, this place is loaded with kids during the evenings!

Conclusion: Cafe Mia is more than a sandwich shop or an ice cream store. They combine the two with a gourmet flair that I haven't seen before in this area. In an area known for good food, they raise the bar and set themselves apart. Highly recommended.