Behind the latest development on 73, just west and across the street from Birkdale is a new sushi restaurant called Coral Sushi. Located behind Hickory Tavern, it's easy to miss from the street.

But after a reader comment, this place has been on my radar. So, my buddy and I decided to give this place a try. There aren't too many sushi restaurants in the area, and we were both curious about what we'd find.

We walked in and were quickly taken to our seats. Too bad it was soo hot out -- I would have liked to sit on their patio -- it looks nice and relaxing. Which is actually the vibe you get from the inside of this restaurant. It's a nice facility, they did a good job decorating.

We looked over the menus and made our decisions. I started our order with the tempura appetizer. Then I ordered the lunch special, sushi combo A. Which with my ordering includes miso soup, an order of California Roll, and an order of Spicy Salmon Roll.

The tempura arrived first, and had a wide variety of veggies (carrots, broccoli, onions, etc.) and shrimp. The veggies were sliced nice and thin, which I like, but the shrimp was on the smaller side of. Also, the fried tempura batter almost seemed more like breading. It was rather thin and consisted of fine pieces, almost like breadcrumbs. This was different, but not necessarily bad.

Next came the miso soup. This was a disappointment. Miso soup usually is very mild in flavor, and this was too. However, there were two things that really turned me off of this dish. 1) In my opinion it was too salty. and 2) To my untrained nose, it smelled like a hamster. (Yes, like those little guys that run around on a wheel.) Needless to say, I didn't finish my soup. Though my friend didn't agree with my smell test, he wasn't a fan of the soup either. 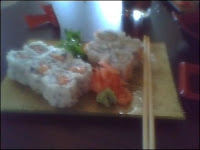 Lastly, our sushi arrived. It was presented nicely, and was freshly rolled. (Just let me say, everything here was presented nicely. They've got aesthetics down!) I prepped my soy sauce with a generous portion wasabi, and dunked the California Roll. It was -- average. It had lots of cucumber, little avocado, and a standard amount of crab. However, it did seem a little chewy -- maybe the seaweed was a little too moist? Either way, I went over to the spicy salmon roll.

I had the same result with the Spicy Salmon Roll. Average. It was a little squishy, even for raw salmon. Again I'm wondering if the seaweed was too moist. The flavor was OK. But for some reason it didn't work for me.

At the end, we asked for separate checks, and the waiter brought us one bill. Sigh, it's not the biggest deal. But it's the reason the service scored a 3 and not a 4.

One last thing, they do have a decent selection of sushi, and I sorta want to try the Godzilla Roll. It has "Spicy Tuna, Avocado, Masago, Scallions flash Fried w/ Chef's Sauce." Thought I'm always a little wary about something called Chef's Sauce, I still wanna try it!

Price: $$ (1/2 appetizer, lunch combo, soda and tip put it at mid-teens)
Kid Friendly: Unknown. I didn't notice a kids menu or specials. I'd call ahead.

Conclusion: Good atmosphere, but the food and service were mostly average. I want to return to try the patio on a nice night and try some of their other foods, just to see if they had an off day.