A little over seven months ago I posted my first restaurant review on this Blog. I visited a new Mexican restaurant called La Unica, off of 73, next to Food Lion, and I was smitten.

The food was great, the service was great, and I realized that I had made a great find. So now, seven months later, I was in the mood for Mexican food, and didn't want to drive too far. This meant I was heading to La Unica to see if the first visit was a fluke.

Everything about La Unica has stayed the same. It still is decorated more like a trendy cafe, than a typical mexican restaurant. I was still seated immediately. And once I sat down, I was again handed two carafes of salsal (medium and mild), and a bowl of lime wedges.

The service here is like clockwork. (Except the servers here are hispanic -- not swiss.) There are several waiters and serving staff who are contantly attending to your every need. Need chips? They're refilled. Getting low on soda? The glass is refilled. Done with your meal? The plate is quickly taken away. The service here rocks!

Once seated, my friend and I glanced over the lunch menu. Being in a perpetual enchilada mood, I ordered the Speedy Gonzalez with rice. That's a beef enchilada and beef taco, and it came with a side of spanish style rice. My friend ordered a combination that included a quesadilla and a Chalupa.

You may remember my brief tirade about another restaurant in the area that tried to pass off a tostada as a chalupa. So the stage was set. It was a battle of the restaurants. Chalupa vs. Fake Chalupa. Who would win?

When the food arrived, the winner was instantly apparent. La Unica delivered a real chalupa. It looked delicious, with the fried dough, cheese, lettuce and meat. DARN! Now I wanted one! 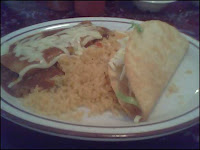 So, I ate my friend's food while he wasn't looking. So, I started eating my meal. It was REALLY good. The enchilada was perfect. The sauce had a deep but spicy flavor, and the beef tasted of cumin and oregano. The same ground beef was found in the crispy taco. But this time topped with fresh lettuce, tomatoes, and cheese. In addition, the crisy shell was slightly different than a standard shell. It didn't spontaneously break apart! It held together throughout the meal.

Then I took a bite of the rice, and I liked it! I'm not big on rice. But I use it as a way to determine how good a kitchen is. Most places serve the rice as an afterthought. And in those places it's usualy stale, and has a distinct flavor of cardboard. Not here. The rice was warm, moist, and flavorful.

It's apparent that they pay attention to the details at La Unica. And because of this, it's one of the better Mexican restaurants in the area! Needless to say, I'm still smitten over this place!

Conclusion: La Unica is proving to provide consistently great food and service, for a reasonable price. It's one of those few gems that I won't hesitate to recommend to a friend.