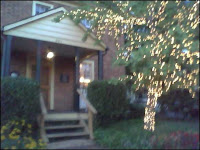 As you may have already read, my wife and I spent the weekend in Winston-Salem. On our first night, we were looking to try some local cuisine. But where should we go? The trendy area in downtown? Or maybe we should just stay at the hotel.... Fortunately we decided upon the Zevely House on West 4th Street.

The Sevely House seems like a quaint and humble house by today's standards. It was built almost 200 years ago, and seems like it'll be standing for another 200. Built by Van Neuman Zevely, a Moravian cabinetmaker, it was the center of a plantation. Eventually it was moved to its present location.

We entered the front door, walked into the livingroom, which now serves as the bar. Because we wanted to sit on the patio, we were told to walk out the front door, and follow the path around the side of the house to the patio. We met the hostess, and were taken to a seat in the corner, with a fan circulating overhead.

Along with the menus, we were handed mosquito repellent wipes. Apparently it's sooo filled with mosquitos during the summer, the fans just aren't enough. Fortunately, we didn't notice any mosquitos, nor did we notice any other patrons swatting the air. So it appears that the mosquitos stayed away this night.

The patio was fantastic. Along with twinkle-lights hanging from the beams, there was a custom-made chiminean in the middle. Though in this hot weather, it only served as a planter. Along the sides of the patio, vines grow along the beams, and proved to be an effective wall from the outside world.

As we looked over the menu, we were intrigued by the food listed. Everything here appears to be made fresh, including the rolls served with dinner. Eventually I decided upon the house salad with green goddess dressing, and I chose one of their entree specials, that had salmon, shrimp, and rice in a lemon coconut sauce. Our waitress took our orders by memory -- without writing it down-- at first I was impressed.

Our waitress returned with our salads. Unfortunately, mine came with the wrong dressing. It came with the thickest vinagarette that I've ever seen. It was more of a spread than a dressing -- and GEEEZ was it tangy. It made my mouth pucker! I asked for the correct dressing, she apologized, and evnetually came back with the correct dressing. Looks like she should have written down our orders after all. But it's only one little mistake, so I overlooked it.

The salad was good. It contained a vide variety of fresh mixed greens. Some of which I don't think I have ever had before. The varied flavors of the food, combined with the creamyness of the Green Goddess dressing to create some wonderful flavors.

After our salad we waited for a while. During that wait, we noticed that everyone who had arrived after us was enjoying their wine. When our waitress eventually came by to take our plates, I asked if we could have our wine. Our waitress apologized, apparently she had forgotten to place the order. Again, it appears that she needed to write some of this down, because we had to give her our wine orders again. 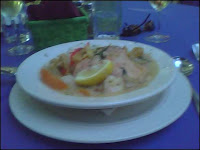 Eventually our entrees arrived, and I was happy with mine. In fact it found it to be freaking delicious! The lemon-coconut sauce worked perfectly with the baked salmon and shrimp. It offered a tangy creamyness that didn't over-power the flavors of the seafood. In addition, the dish dad grilled vegetables too, and this even worked with the sauce. Really an amazing meal, and I haven't had anything quite like it. Their chef really works to ensure an original menu.

Next came our dessert. We decided to split the Brown Sugar Pound Cake. This again was an original dish. I've never had a brown sugar pound cake, but I hope to again. It was moist and flavorful -- that flavor being brown sugar (YUM!). The pound cake was topped with a caramel-ish sauce. Just amazing. I was about ready to go into a diabetic coma after that dessert -- but it was worth it!

After our dessert our waitress brought us the check -- for another table. I'm thinking maybe she needs to look for another profession. But that's just me. Overall the food and atmosphere were the winners, and that's what will bring me back here again.

Price: $$$$ (over $30 per person for entree, salad and dessert)
Kid Friendly: I'd bring older children. It's a mellow older crowd that dines here.

Conclusion: Zevely House has a original and creative menu that compliments the extensive wine selection. Our service for that night was friendly -- but poor. However, the atmosphere and food were so good, that I will definately return.